The longest immersed tunnel in the world is currently being built by Germany and Denmark. 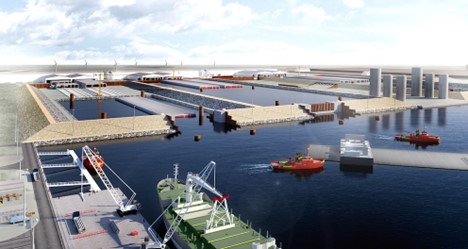 The longest immersed tunnel in the world will connect Germany and Denmark in 2029, reducing

travel times between the two nations as it descends up to 40 metres beneath the Baltic Sea.

Construction of the Fehmarnbelt Tunnel began in 2020 after more than a decade of preparation,

and in the months since, a temporary port has been finished on the Danish side. It will serve as the

According to Henrik Vincentsen, CEO of Femern A/S, the state-owned Danish company in charge

of the project, “by the beginning of 2024 we have to be ready to immerse the first tunnel element.”

start of the following year.

With a building expenditure of more than 7 billion euros ($7.1 billion), the tunnel, which will be 18

kilometres (11.1 miles) long, is one of the greatest infrastructural projects in Europe.

Comparatively, the 50-kilometer (31-mile) Channel Tunnel between England and France, which

constructed using a boring machine rather than by submerging pre-built tunnel sections, although

being longer than the Fehmarnbelt Tunnel.

It is intended to replace the present ferry service from Rdby and Puttgarden, which ferries millions

of people each year across the Fehmarn Belt, a strait between the Danish island of Lolland and the

German island of Fehmarn. Instead of the 45 minutes it currently takes to cross by ferry, it will only

The Fehmarnbelt Fixed Link, as the tunnel’s official name is, will be the world’s longest combined

road and rail tunnel. There will be two electrified rail tracks, two double-lane roads, and a service

Hamburg instead of the current four and a half hours, according to Jens Ole Kaslund, technical

director at Femern A/S, the state-owned Danish corporation in charge of the project.

Many people go by plane between the two cities now, but taking the railway will be preferable in the

future, he continues. Taking into account the time saved by not waiting in line for the ferry, the

identical trip by automobile will be completed around an hour faster than it did today.

According to Kaslund, the tunnel will have good effects on freight vehicles and trains in addition to

Europe by 160 kilometres from the current route.

A lengthier route through bridges connecting the islands of Zealand, Funen, and the Jutland

The tunnel construction project began in 2008 when Germany and Denmark agreed to build it.

While the procedure went without a hitch on the Danish side, a number of parties, including ferry

companies, environmentalists, and local governments, appealed against the project’s approval due

to allegations of unfair competition or noise and environmental concerns.

A German federal court dismissed the objections in November 2020.

“The judgement came with a series of restrictions, which we kind of expected and we were prepared

for, on how we monitor the environment while we are building, on things like noise and sediment

Several additional project phases, including the drilling of the actual trench that will house the

tunnel and the construction of the factory that will produce the tunnel sections, are under way now

that the temporary harbour on the Danish site has been completed.

Each segment will be 217 metres long 42 metres broad, and 9 metres tall, or almost half the length

of the largest container ship in the world. They will each weigh 73,000 metric tonnes, which is

equivalent to more than 13,000 elephants.

Six manufacturing lines and three halls will make up the facility, which is already 95% finished,

according to Vincentsen. The sections will be positioned immediately below the seabed, about 40

metres below sea level at its deepest point, and will take around three years to complete.

The building project, which has been hampered by the issues with the global supply chain, will

We do get the materials we need, but it’s challenging and our contractors have had to increase the

number of suppliers to make sure they can get what they need. That’s one of the things that we’re

really watching right now, because a steady supply of raw materials is crucial. “The supply chain is a

challenge at the moment, because the price of steel and other raw materials has increased.

The Confederation of Danish Industry, one of Denmark’s main business associations, is led by

Michael Svane, who thinks the tunnel would benefit companies outside of Denmark.

believes the project will be good for the ecosystem.

and German sides. Nature requires room, and as a result, there will be more space for nature,” he

Faster Belt passage would make trains a serious competitor to air traffic, and hauling freight on

electric trains is by far the greatest option for the environment. However, the benefit for the climate

will be the biggest benefit.